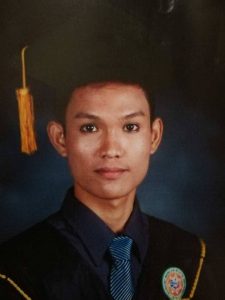 It was midnight of 2 November 2017 when Kenneth officially joined the world of Accounting upon surprisingly seeing his name on the list of successful board takers from the Mariano Marcos State University, Batac City, Ilocos Norte.

This was the start of his quest for a better life for his family that he prayed and longed for. “Ang pagtatapos ko sa pag-aaral ay ang unang hakbang sa aking pagbibigay pasalamat sa ating pamahalaan sa mga tulong na naibigay sa aming pamilya (Graduating is my first step to extend my gratitude to the government for the assistance given to our family),” Kenneth said.

He was once one of the grantees of the Expanded Students Grants-in-Aid Program for Poverty Alleviation (ESGP-PA) through the joint endeavor of the Commission on Higher Education (CHED) and Department of Social Welfare and Development (DSWD) in providing educational grants to poor but performing college students under Pantawid Pamilyang Pilipino Program.

He believes that education is the most valuable treasure he can inherit from his parents. His father died due to chronic disease while his mother Remedios raised him and his four siblings. Education for him is a key to open many doors of opportunity. He chose to enter the door of opportunity that opened before him as a Tax Associate in a private company four months ago.

Kenneth is challenged by the saying that goes, “Hindi kasalanan ang ipinananganak kang mahirap pero kasalanan mo kung mamamaytay kang mahirap (Born poor is not a sin, but to die poor is).” While in his productive years, he wants to live a fulfilled life together with his family.

Looking back at the hardships of his single mother, Kenneth made a promise to himself. He will be the best Accountant that he can be. He wants to build a new house for his family.

Since still new in the service, he foresees realizing his plans for his family. Now is the right time to move. “Alam ko na sa pagiging matiyaga, masipag, at lakipan mo pa ng tulong mula sa Panginoong Diyos, pasasaan at maisasakatuparan ko rin ito (I know that by being patient, hardworking, coupled with the aid of the Almighty, these will all come to reality).” (by: Jaesem Ryan A. Gaces, Information Officer II/Pantawid Pamilya and Arlem Kenneth R. Areola, IPDO for NGAs)