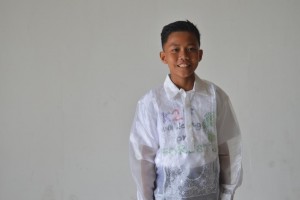 It is the pride of the Department of Social Welfare and Development Field Office 1 (DSWD FO1) that a Pantawid Pamilya beneficiary was recognized by private groups and institutions and some government agencies as one of the Young Earth Ambassadors in Region 1. Daryll boldly advocates for the conservation and protection of natural resources. He influences and encourages the youth, community, school, local politicians, and his family to promote sustainable management of the environment and natural resources. He personally talked and discouraged his father Ernesto, 47, to give up charcoal making and just continue with their piggery business through the DSWD’s Sustainable Livelihood Program (SLP). Daryll, the youngest among three siblings, is in Grade 6 at the Nagyubuyuban Elementary School and top 3 of his class.

Darryl is one the 41 Young Earth Ambassadors regionwide and one of the two chosen to represent the Kids-to-Forest Program in the Asia Pacific Forestry Convention, along with other children advocates for the environment nationwide to share his heartfelt life story of his passion for natural resources conservation.

During the 166th Founding Anniversary of the Province of La Union, he is the youngest recipient of the Governor’s Award because of his noble achievement. (Jaesem Ryan A. Gaces, Information Officer II/Pantawid Pamilya)