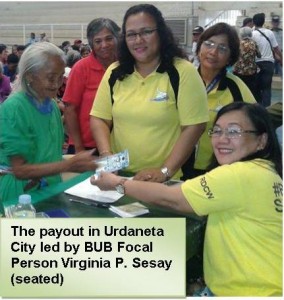 The Department of Social Welfare and Development (DSWD) Field Office 1 gave Php 5,000.00 each to 200 poor senior citizens from the Bottom Up Budgeting (BUB) as a one-time financial assistance to augment their basic needs.

These poor senior citizens ages 77 below were assessed and recommended by the City Government of Urdaneta because of their poor condition, disability, and lack of support from relatives since they were not included in the Social Pension Program.

They were even visited house to house by the City Social Welfare and Development Office (CSWDO) staff to properly evaluate the condition of these elderly.

DSWD attested that these senior citizens are also included in the list of poor families or LISTAHANAN database.

During the payout on 8 January 2015, grateful senior citizens said the assistance was the first of its kind given to them, BUB Focal Person Virginia P. Sesay narrated in an interview.

In BUB, the people in the community are involved in identifying projects according to prioritized felt needs by the residents. (by : Iryn D. Cubangbang, Information Officer II)