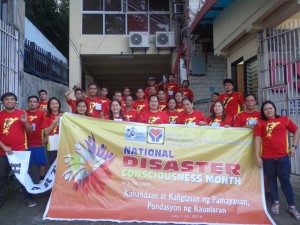 This activity aims to strengthen convergence and cooperation of the RDRRMC in increasing people’s awareness on disaster preparedness and response.

With this fun run, DSWD continues to educate and make the public aware on disaster preparedness being its role as one of the member agencies of the National Disaster Risk Reduction and Management Council (NDRRMC).

PO1 Romar Sandoval from the PRO1-RPSB1 garnered the first prize after finishing the fun run in just 10 minutes followed by Mr. Darwin Garcia of DSWD and Mr. Ignacio Guieb of DPWH, respectively.

Winners were awarded with DSWD disaster bags and umbrellas.

According to PO1 Sandoval participating to such activity is his contribution in promoting people’s preparedness in times of disaster.

He also added that the PRO1-RPSB1 always integrates disaster preparedness during their trainings.

National Disaster Consciousness Month is being celebrated every month of July as per Presidential Proclamation No. 137. (by: Jaesem Ryan A. Gaces, Administrative Assistant III, Listahanan/NHTS-PR).