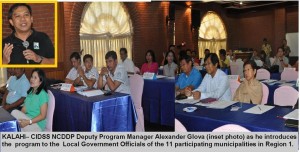 Local people’s participation in planning and budgeting geared towards more active communities and better access to basic services are just among the components of the DSWD’s new poverty reduction program strategies in Region 1.

With KALAHI-CIDSS NCDDP, local communities will be capacitated. The program investments of at least Php 2 million and maximum of Php 20 million per cycle (worth of projects per municipality) will create significant impacts as observed in other areas in the Philippines that were first to implement the program.

The participation of local residents on planning, budgeting and implementation of community projects, co-ownership and attentiveness to project details will ensure that projects are better kept.

As Deputy Program Manager Alexander Glova quoted Nelson Mandela,   poverty is man-made and it could be overcome and eradicated by the actions of human being. With KALAHI-CIDSS NCDDP, the local residents, the Local Government Units and partners draw solutions to ‘felt and imperative needs’ in the communities.

With its effective implementation, convergence of resources and expertise is accelerated. The generation of massive employment opportunities and community projects scale up in the reduction of poverty in its multiple dimension, Glova further explained.

Since the Program’s introduction to the participating LGUs, social preparation will last for more than a year. (by: Iryn D. Cubangbang, Information Officer II)