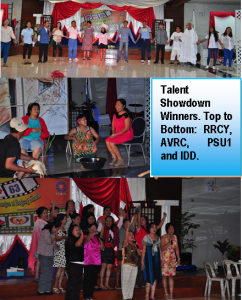 The manpower of the Department of Social Welfare and Development Field Office 1 (DSWD FO1) do not only excel in the implementation of social protection programs but also in showcasing their talents.

All the employees celebrated the Department’s 63rd anniversary through a talent showdown during the socialization night.

Various talents were unleashed in the Sayawikit a combination of Sayaw (Dance) Awit (Song) and Skit. The creativity of each competing group dazzled the socialization night.

Among all the contenders, RRCY was hailed as the champion, AVRC being the first runner up and PSU 1 and IDD, the second runner up.

Individual special awards were also given to those who have outstanding performance during the contest. Ms. Lorena Cariazo from PSU 1 was awarded as best actress and Mr. Ferdinand Franco Quinzon from RRCY was the best actor.

All winners got the attention and even emotional attachments of the guest judges as they portrayed through dances, songs, and skit life changing stories brought about by the Department’s services to the needy as being depicted by this year’s anniversary theme, “Kaagapay sa Pagbangon at Bagong Simula.”