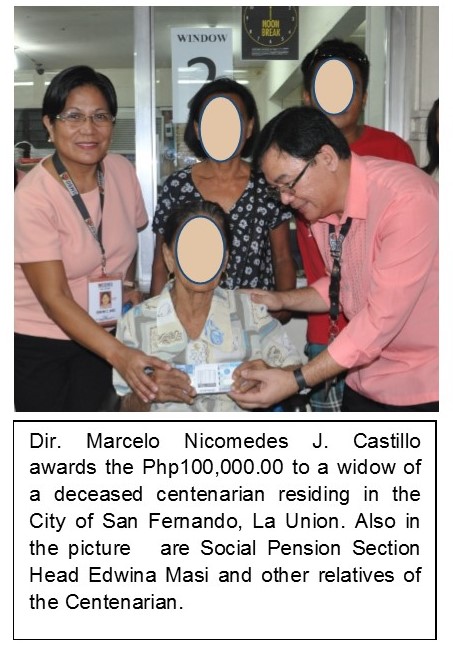 As of first week of August, the DSWD Field Office 1 (FO1) has released a total funding of Php 41.5M for 415 elderlies aged 100 to 114 years old, the latter being recorded the oldest in the region from Sison, Pangasinan. This also included those family members of deceased Centenarians who also received the same   Php 100,000.

Along with families keeping them and taking care of their needs, these centenarians proved longevity in Region 1.

As mentioned by Dir. Marcelo Nicomedes Castillo, this incentive giving is among the strategies of the government to recognize remarkable contributions of these elderlies to their families and communities and keeping healthy living as well which was also stipulated in Republic Act 10868  of 2016.

Accordingly, there are 596 Centenarians initially listed by FO1 submitted to Central Office (CO) for funding.

Of this number, 132 reside in Ilocos Norte, 139 in Ilocos Sur, 100 in La Union, and 225 in Pangasinan. Also, there are 181 deceased Centenarians subject for validation.

Recently, a Centenarian from the City of San Fernando, La Union got her check at Field Office 1 amounting to Php 100,000.00. With her are her children and other family members who are also very thankful to this program of the government. According to the Centenarian, being prayerful and vegetarian helped her reach her current age. The family members were reminded on the proper use of the money and to prioritize the needs of the elderly.

Among those who patiently wait for their turn to be given the Centenarian gift is Lola Tere (alias), 100 years old, from Piddig, Ilocos Norte.  In an interview, she shared her secrets to long life. “Agsingsingpet kayo ngamin ah, mangan nateng, prutas,  haan a sitsirya (Be good and eat fruits and  vegetables and not junk foods),” she narrated.

Odd as it may be, it was also mentioned by the granny that the Centenarian gift will be used to purchase needed materials when her death has come.

“These Centenarians deserve this incentive from our government not just of long life but because in their productive years, they contributed to any form of human development that our generation is now enjoying,” Director Castillo narrated in one Monday Program of DSWD. (by: Iryn D. Cubangbang, Information Officer II)