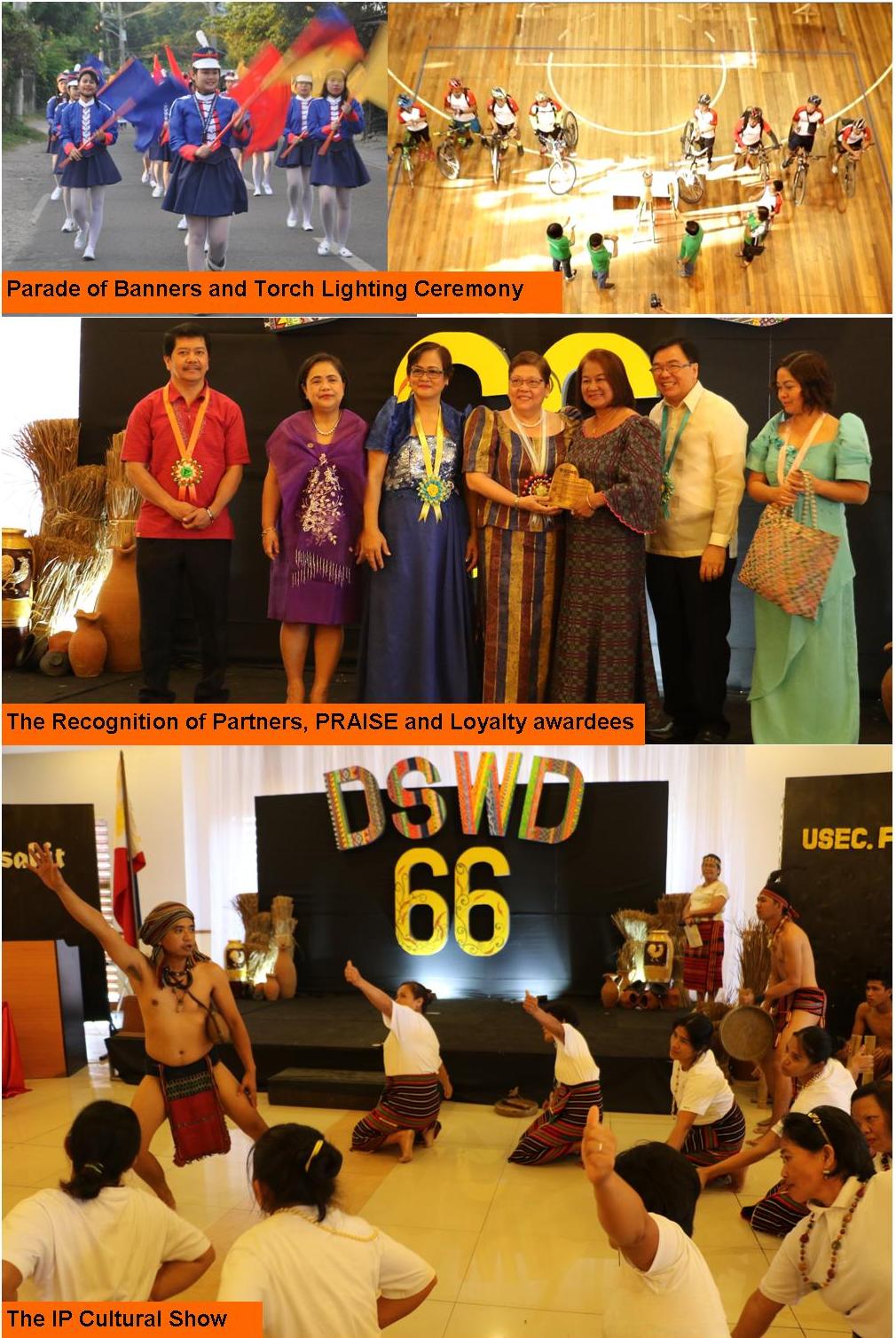 A series of events consisting of a first-time Parade of Banners with the PNP Regional Command, a Mini-Concert with the PNP Concert Band, and a Sportsfest featuring indigenous games launched the anniversary celebration on 08 February 2017. Subsequently, the Awarding of Partners and Loyalty and PRAISE awardees was held on 17 February 2017. The events were held at the Pacoy Ortega Gym and Hotel Ariana, respectively.

The kick-off event’s torch lighting ceremony led by Director Marcelo Nicomedes J. Castillo encouraged the employees to stay united and passionate in the delivery of social services along with partners who pledged to serve amidst difficulties and various circumstances.

The Recognition of Partners and PRAISE and Loyalty awardees graced by Undersecretary Florita R. Villar also acknowledged the fully-functional Local Social Welfare and Development Offices (LSWDOs) among other partners.

Guest Speaker Usec. Villar reminded the staff to remain steadfast from various challenges while maintaining integrity and compassion at work. “Hindi tayo dapat mawalan ng pag-asa at kaligayahan sa kahit anumang ating kinakaharap sa trabaho at sa pamilya kung tayo ay sama-sama (Losing hope is not an option to whatever hardships we encounter as we are moving as one),” Usec. Villar shared.

Director Castillo mentioned that the celebration is likened to reaping the harvest of good works. “We shall keep our high spirits in sustaining all the good practices that we have established but we shall also be reminded to learn from the struggles that we have surpassed for us to deliver the services with our Maagap at Mapagkalingang Serbisyo,” Director Castillo said.

The Program for Rewards, Awards and Incentives for Service Excellence (PRAISE) recognized the exemplary performance of Aristedeo V. Tiñol and Jeany Cayabas- Buteng. A special award was given to Darwin T. Garcia for working without reservation in fulfilling the assigned tasks with all his might.

As among the significant part of the event, the Indigenous Peoples (IPs) Cultural Show featured the Agamang Group from Santol, La Union – a group of IPs who are also beneficiaries of the Pantawid Pamilyang Pilipino Program.

Through their rich culture and active participation, the opportunities gave better understanding of their way of life complemented by poverty-reduction programs.

The celebration was not only of thanksgiving but most of all of giving praise to God and appreciating all the efforts of workers, partners, and leaders of DSWD FO1, as OIC ARD Nora D. Dela Paz said in her closing message. (by: Iryn D. Cubangbang, Information Officer II)