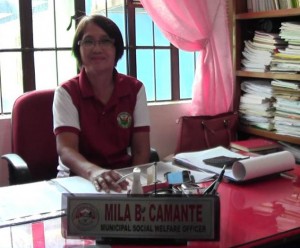 The Local Government Unit (LGU) of Laoac, Pangasinan appreciates the importance of having a list of poor households provided by the Listahanan or the National Household Targeting System for Poverty Reduction (NHTS-PR) by entering into a Memorandum of Agreement (MOA) with the Department of Social Welfare and Development (DSWD).

According to her, LGU Laoac headed by Mayor Silverio D. Alarcio Jr. strongly believes that the data from Listahanan is a reliable reference in targeting poor households in need of social protection programs and services for poverty alleviation.

Most of the beneficiaries of all the programs and projects that are being implemented by LGU Laoac comes from the Listahanan list of poor households, including the “Special Program for the Employment of Students (SPES)” where 30-50 poor students work as assistants in the offices of LGU Laoac during summer so they can earn money for allowance in the coming school year.

Further, poor farmers in LGU Laoac in the Listahanan are the priority recipients of free fertilizers, seedlings, and farm machineries in partnership with the Department of Agriculture.

MSWDO Camante also shared that LGU Laoac has funded sustainable livelihood programs for poor households like making Tupig (a popular native delicacy) and vinegar so the beneficiaries can have other sources of income. (by: Jaymante Pearl B. Apilado, Administrative Assistant III, NHTS-PR/Listahanan)