We live today in a troubled world. According to Thomas Paine, “these are the times that test men’s souls.” Just like other sectors in our own communities, we feel crises. Crisis after crisis besets our nation.

However, for us elderly, it is not a hopeless case. These are only challenges to our human development.

We can overcome them if we possess the strength of will and a godly character. If a single individual with bright ideas can do much to conquer these problems, how much more if all of us would join together to battle these trials?

For us elderly, we played a great role in the society during our younger years but now no longer productive in our community, so we are so privileged nowadays for the implementation of Republic Act 9994 otherwise known as Expanded Senior Citizens Act that provides Social Pension to indigent senior citizens.

A certain fellow named Angel Abella, 86 years old and a resident of Ballag, Bani, Pangasinan is one of the lucky beneficiaries of Social Pension.

When he was younger, he was good in crisis management and was able to raise his 6 children. He worked regularly as a farmer and a carpenter and engaged in charcoal-making. He was hired by his neighbors and relatives as their laborer.

He was not able to send his children to school because of his meager income, so the children are also like him who have “hand to mouth” existence. 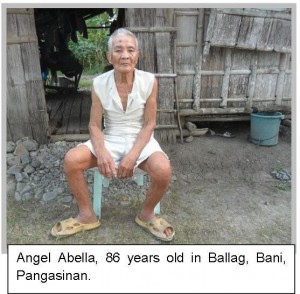 me old and weak, and no one will hire him as a laborer. He lives alone in his poor house just waiting for help from his children, neighbors, and relatives.

Being a social pensioner now, he is grateful and blessed that he can provide himself with his basic needs. His children and neighbors who assisted him daily are so thankful that he was chosen as a social pensioner to lighten their load, the caretaker could already buy his food and a little of his daily needs.

May he continue to receive his pension to ease his caretaker and to support his daily needs to avoid burden among his neighbors and his barangay mates in general. (Contributed by: Dr. Elpidio P. Calixto, FSCAP President, Bani, Pangasinan)