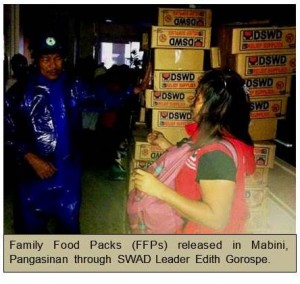 On its fourth day of operation, DSWD’s repacking and transporting of family food packs (FFPs) are on-going for the provinces of La Union and Pangasinan.

According to Director Marcelo Nicomedes J. Castillo, a total amount of Php 1.2 million family food packs was already augmented to the existing resources of the affected Local Government Units.

In coordination with the Office of Civil Defense, army and navy trucks are being utilized to deliver goods to affected areas. Today, 1,000 FFPs are expected to arrive in Infanta, 1,500 FFPs in Tayug, 1,000 FFPs in Urdaneta City, and 1,000 FFPs in Alcala, all in the Province of Pangasinan.