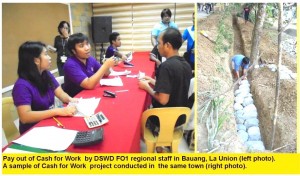 Cash for Work  (CFW) and Emergency Shelter Assistance (ESA) worth Php12 million and Php21.6 million, respectively, were released to 20 munipalities and 1 city in Region 1 benefitting 9,966 families who were typhoon victims in 2014.

The Cash for Work Program restores community structures and facilities such as canals, water tributaries, public buildings and roads. Typhoon victims or indigent families are temporarily hired to work for 10 days for a minimum wage of Php190 per day.

The ESA is given to family-beneficiaries to rebuild or repair their houses in the amount of Php5,000 or Php10,000 for partially or totally damaged houses, respectively.

According to Regional Director Marcelo Nicomedes J. Castillo, the assistance was downloaded by the DSWD–Central Office based on FO1- Disaster Response Assistance and Management Unit’s (DReAMU’s) Rehabilitation Plan which is a consolidation of accurate and on-time disaster reports from Local Government Units (LGUs). (by: Iryn D. Cubangbang, Information Officer II)