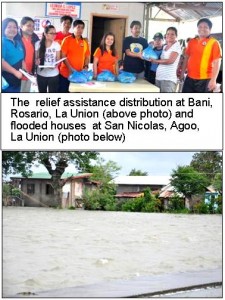 DSWD’s relief augmentation to victims of ‘Typhoon Luis’ is ‘put on hold’ until the Local Government Units (LGUs) are able to provide for the immediate needs of typhoon victims with their current resources.

Since DSWD started its ‘disaster operation’ for ‘Typhoon Luis’ 2 days ago, it has activated its Quick Action Response Teams and Social Welfare and Development Action Teams in the provincial offices to assist counterparts at the local levels and validate disaster reports.

The reported and confirmed 5,115 affected families (as of Sept. 15 report) come from 53 barangays in Region 1. Among them come from 22 barangays in Mangaldan, Pangasinan; 30 barangays in La Union; and 1 barangay in Batac City who were initially provided with family food packs .

These barangays are along the coastal areas wherein residents are not allowed to go fishing and the family food packs are just in time for their family’s need. (by: Iryn D. Cubangbang, Information Officer II)