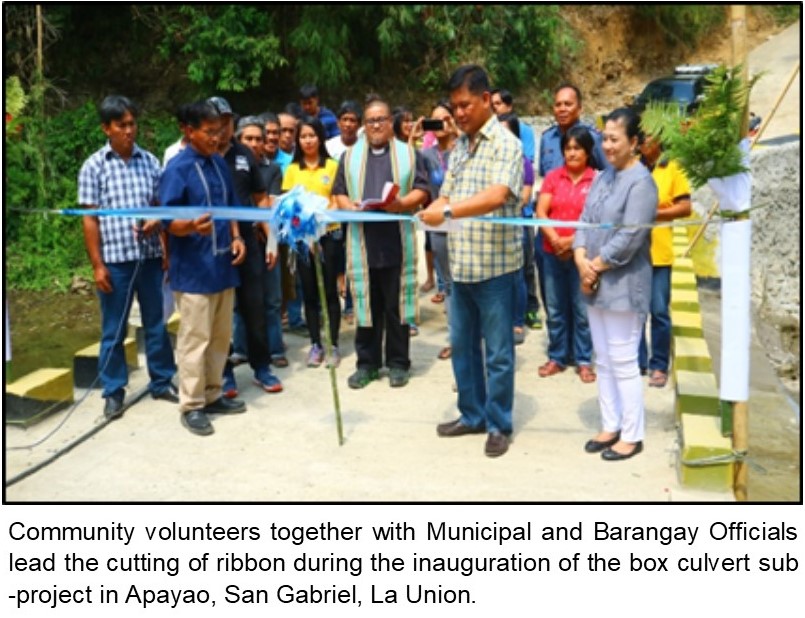 The box culvert sub-project of Apayao, San Gabriel, La Union under the supervision of the Department of Social Welfare and Development Kapit-Bisig Laban sa Kahirapan–Comprehensive and Integrated Delivery of Social Services (DSWD Kalahi-CIDSS) got support from the Provincial Government of La Union (PGLU) as a result of the perseverance and unity of the villagers.

The construction of box culvert was the sub-project proposal for the third cycle of said barangay that was prioritized during the Municipal Inter-Barangay Forum – Participatory Resource Allocation (MIBF-PRA).

A CHANGE OF FATE

Information about the result had spread out easily in Apayao through short messaging services (SMS) by the villagers who attended the forum which brought excitement to most of them. But there is still one criterion that needed to be addressed before announcing the final winner – the deduction of points to the overall score for some criteria that were not met during the community planning cycle.

For having absences by some residents during barangay assemblies, a point deduction had caused them to slip to third spot in the list of prioritized projects to be funded.

The sub-projects of Lipay Norte and Lacong have moved up to first and second positions, respectively. During the allocation of the more than PhP7 million funds for San Gabriel, after the first two sub-projects got their shares, the community volunteers and barangay officials were dismayed when the remaining fund was no longer sufficient for their proposal.

“Sobra kinaragsakmi talaga idi makitami nga dakami ti immuna nga na-prioritize (We were really very happy when we saw that we were the top priority),” said Jose Delfin, Chairman of Barangay Sub-Project Management Committee (BSPMC). “Ngem nagsangit kami nga volunteers idi makitami nga agkurangen ti nasurok nga PhP600,000.00 daydiay pondo. Kayatna sawen nga saanmin a maaramid diay sub-project mi (But we volunteers really cried when we saw that the fund was already short of more than PhP600,000.00 to support our sub-project. It means that we can no longer build it).”

Barangay Captain Libong witnessed how devastated his constituents in the audience were. They did not know how to explain the mix-up of rankings to the other villagers who were earlier informed by SMS that they had already won.

The community volunteers urged Barangay Captain Libong to call for a caucus and it was agreed by the whole community to seek the help of the municipal officials for additional funding which prompted him to immediately call Municipal Mayor Herminigildo M. Velasco.

“Tumawag sa akin si Kapitan Libong kahit gabi na (Brgy. Captain Libong called me even if it was late at night already),” said Mayor Velasco. “Nararamdaman kong mangiyak-iyak siya na nagsasabi ng kanilang problema (I felt like he was on the verge of crying while he was telling me their problem).”

Since there were no more available municipal funds to augment the demand of the residents of Apayao, Mayor Velasco, together with Sangguniang Bayan Member (SBM) Divina D. Velasco, brought the matter personally to Governor Francisco Emmanuel “Pacoy” R. Ortega III.

After two months since the meeting with the governor, the PGLU granted the additional fund for the people of Apayao.

The community volunteers started the sub-project on 19 December 2017 with the assistance of the Area Coordinating Team (ACT) of DSWD Kalahi-CIDSS of San Gabriel. The box culvert was finished on 31 March 2018.

During the inauguration of the sub-project, Leticia Balanon, a midwife and a community volunteer said, “Dakkel unay a maited na nga pagimbagan daytoy a sub-project. Makalasatkamin iti panagtutudo wenno nu dakkel ti karayan. Kasta met nga maipanmin mailako idiay ili dagiti produkto mi (This sub-project benefits us a lot. We can now cross the place even during rainy season or when the river has high water level. Also, we can now bring our harvests to the market).”