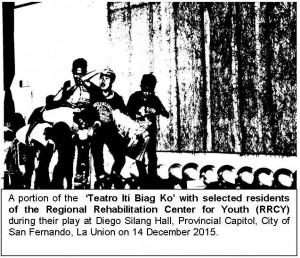 This was featured during the State of DSWD Region 1 Address at Diego Silang Hall, Provincial Capitol, City of San Fernando, La Union on 14 December 2015.

During the series of workshops and team building activities, self confidence, camaraderie and unity were strengthened along with their enhanced acting. The roles they played did not only magnify the efficiency of services but also the transformation emanated from the Regional Rehabilitation Center for Youth (RRCY) actors (residents) themselves.